Just back from the Amazon Basin, Northwest Renewables manager Grant Neely reflects on his January adventure with solar nonprofit Twende to electrify the remote Peruvian indigenous village of Mushuk Llamas.

Shapaja, Peru- The steep, two-mile hike to Mushuk Llamas is daunting but beautiful, alternating between forest switchbacks and straight shots up the slopes until views open up, and you can see the muddy Rio Huallaga far below, wending its way to the Amazon. The air is warm, moist and rich with jungle scents. 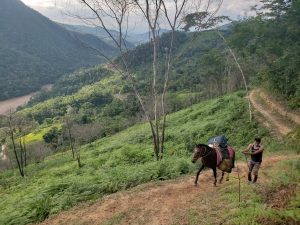 We’re carrying heavy packs. Fortunately, a boy from the village brought down a horse to help haul gear and tools — a huge relief. We struggle as we make repeated laps up the trail, lugging twenty-eight solar panels, six big 50-pound batteries, a dozen 14’ aluminum rails, plus bags and boxes of hardware, brackets, inverters, charge controllers, and other electrical components. Every piece of this village’s new solar power system must be humped up to the village. However, for the Mushuk people this is just another day hauling heavy loads up steep slopes, and many power past us in flip-flops or bare feet. They’re the strongest people I’ve met.

Mushuk Llamas turns out to be a dozen single-story wooden buildings and huts roofed with palm thatch or corrugated steel, perched in a large clearing on a less steep section of hillside with commanding views of jungled ridges extending into the distance, while at night the valleys below twinkle with the lights of tiny nearby Shapaja and more distant Terapoto, the San Martin region’s hub and airport where we flew in. However, this is officially a cloud forest habitat, and we are about to find that it often lives up to its name with frequent rain and fog. 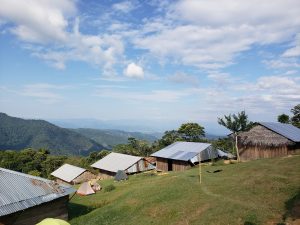 Unlike the towns and the eco-tourism lodge we passed on our way to the trailhead, this is a world apart. At first glance, the place looks poor, with dirt-floored homes, thin livestock, and guard dogs kept to fend off predators like jungle jaguars. However, if you asked the Mushuk if they are poor they would most likely say “hell no!”. They merely know how to live well with less. They know the Internet, and how to find America on a map. Yet they are also steeped in indigenous tradition, and many speak Quechua, the ancient Andean language that predates even the Incas, and which the Spanish tried but failed to suppress for centuries. Many of the village elders have been here all their lives. It’s common to see a woman in her eighties huff past, barefoot, carrying a heavy, head-strapped backpack. Other villagers spend their days picking coffee and climbing palms for coconuts — and then offering evening physical therapy sessions to us, who haven’t done anything nearly as strenuous.

Villages like Mushuk Llamas don’t get much support from Peru’s government. Schools are few and far between, and they also have strict entry standards plus requirements such as costly uniforms and books that discourage low-income families. Also, teachers don’t make very much so there is little incentive for good teachers to stay in Peru. Therefore Internet access and the ability to do homework remotely are very important, so our electrical system work will be a huge boon to students and families here. 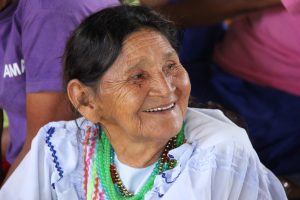 Once the gear is up the hill, the first order of business is digging eight one-meter-deep foundation holes where we’ll erect the array posts in concrete. How does one get concrete at the top of a mountain, you ask? Simple. Mine and make it on site! A dozen bags of cement were hauled up the trail by villagers and horses, but the sand to complete the mix now comes straight from the land — from a sandstone outcropping a kilometer away, where villagers show us how to  chisel off chunks and then pound them into sand, which we then bag and carry back to the village. It seems so easy to the Mushuk; merely making use of their resources as they always do, which impresses us even more.

Beneath the grass at the array site lies thick clay and mud, ideal for trenching. We and dozens of villagers spend an entire day digging trenches for electric lines from the array above the village twelve meters down to the community center, then another fifteen meters to the nurse’s station, then thirty meters more to the all-important soccer pitch. A great community work party by all: builders working at the array to set posts; curious newcomers to electrical work helping wire every single outlet, switch, and light socket; and even young boys swinging picks and shovels alongside us all day through the beating heat. 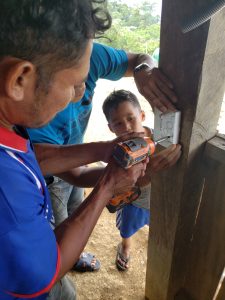 It rains the next few days and everything becomes a muddy mess. Still, in less than three days our gringo team and a dozen villagers have the foundations poured, the posts set, the rails up and the modules installed. After the local elders express concern about children getting into the wiring, we engage a local woodcutter to provide lumber so we can create an enclosed electrical room beneath the array. The woodcutter fells a nearby jungle tree and then, with nothing more than his chainsaw, deftly mills a whole stack of boards and posts sized for our needs. Amazing.

Two days later the electrical components are mounted in the electrical room, and wires are run in buried conduit to outlets and lights in the community center, nurse’s station and soccer field. As rain pours in warm dusk, we gather the work crew along with curious kids and women cooking our food nearby, we flip a switch and…there is light! A warm glow shines from the windows of the nurse’s station and community building, while the two floodlights we installed at the soccer field turn half of the village to daylight. A whoop goes up as villagers clap, looking back and forth at the lights, at us and at each other, agog and grinning from ear to ear.

In the gathering darkness, despite the rain, dozens come out to stroll and admire the lights as kids play soccer later than they’ve ever played in the village before.

Soon a man shows around a text he just received from a friend a few miles away in Shapaja, the nearest town with utility power: “What’s going on up there? We see lights but our electricity is out!” Yes, down in “civilization” people were groping through darkness while up here in the hinterlands we partied under solar-and battery-powered lights! 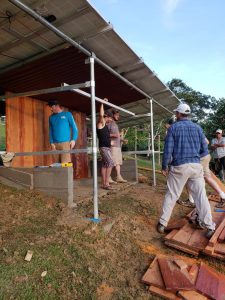 Two days later it’s 10:00 am and time to say goodbye to this place and the people we’ve come to love. The sun is out and so are all of Mushuk Llamas’s people, to help the Apu (chief) formally thank us. Speeches are made, toasts are raised with beer and chicha (corn liquor), and each of member of our Twende team is called up to the stage, one by one, and presented with a handmade belt embroidered with our name. A small marching band has appeared from the valley below, striking up tunes we don’t know, and the party is on. Two hours later it’s time to hoist packs and stagger down the trail, returning to the outside world. 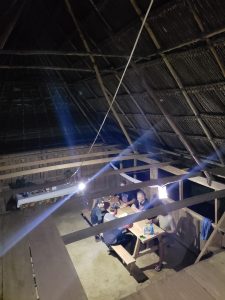 Let there be light!

All the way down the mountain we can’t help thinking that we are witnessing much more than electricity’s arrival in a remote Amazonian village. This looked like the future, and a good future at that!